Discussion Of Everything Legal Is Good, Past Contests Are here.
Post Reply
1248 posts

Wuhan coronavirus: Is this the latest virus they are going to make money with selling vaccines?

The Coronavirus / COVID-19 is going to be talked about well into next year ( if not longer) we can't have dozens of threads here about it. Let's keep all discussion, news, updates, questions.... in this thread.

I am going to merge all existing Coronavirus threads here now, otherwise the forum will just get side tracked and off topic. No business will get done.

And please note, no Coronavirus offers, products, remedies on the forum, see this THREAD
Peace

This image of the cases and suspected cases worldwide from thesun.co.uk today 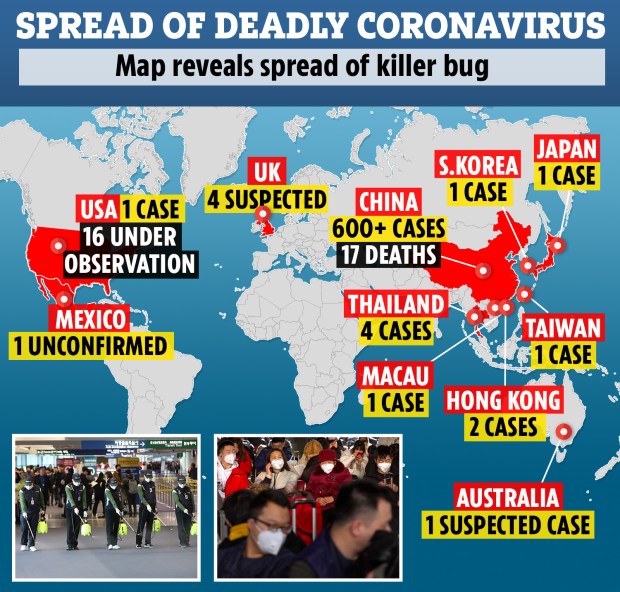 The bird flu, swine flu, now this one.

China is closing off cities a lot of public places, they are doing all the right moves to contain this.

This thing is deadly and spreading all over the world very fast.There is a news story that China is building a hospital for 1000 patients in 6 days. That shit is fast man.

This is very scary for us in the Philippines we have many people going and coming from China.

The bad news is from reports on tv and online this virus is spreading very fast. They have to come up with a vaccine fast before it gets way out fo hand.

I'm scared to go to public places such as the mall, cinema or restaurants,

There goes the tourism business in Wuhan

Over 6,000 reported cases worldwide today, it is spreading fast. A few questions.

What if we buy some thing made in China and the item has been touched by an infected Coronavirus person, can we contract the virus?

Now 6,000 people are stuck on a cruise ship over one person showing Corona virus symptoms.

Here read it on CNN


Hong Kong (CNN)Six thousand people are being kept on a cruise ship in Italy as one passenger shows symptoms of the Wuhan coronavirus, while Russia is shutting its border with China to stem the spread of the outbreak.
The number of cases of the virus that originated in the Chinese city of Wuhan has shot up by 30% in just a day to more than 7,700 on the country's mainland. Elsewhere, more than 100 people have been infected in 20 countries or territories across North America, Europe, Asia and the Middle East. Most concerning, instances of human-to-human transmission have been reported overseas, including in Germany, the first such case in Europe.
A spokesperson for Costa Cruises told CNN that a 54-year-old woman was showing symptoms of the virus, namely a fever.
"All the other passengers are, at the moment remaining on board," the spokesperson said.

And about time, The World Health Organization has declared this virus a “public health emergency of international concern”

Today they reported 213 dead and 9709 infected in mainland China so far, this is on cnn.